This morning David Lindo and I woke up early as we had to clean the house and pack our stuff as David was heading back home. We had to catch the ferry from Suðuroy to Tórshavn, but on the way to the ferry we made a short stop at Tjaldarvík. It’s a good place for scoters as Surf, Black and Velvet Scoter have been seen there.

As we got out of the car I found a ”Velvet Scoter” type quite far away. It was still quite dark in the weather and the bird was already quite distant when I got a scope on it (after taking some pictures as it swam away from us). The combination of an apparently solid dark bird (making me think of an adult male), the lack of a ”horn” on the bill and just a small white patch behind the eye made me exclude the ”funny” white-winged options. And we were in a hurry to catch a ferry, so we had to leave the bird. And after all I did have some photos so I could double-check later.

When I got home and uploaded the pictures to the laptop I almost choked. The colour on the bill wasn’t yellow as I had thought in the field. It was pink rather than yellow and the coloured area was restricted compared to Velvet Scoter. Furthermore the head shape was rather squarish.

The extent of yellow on the bill should exclude Stejneger’s Scoter thus leaving us with the second ever American White-winged Scoter of the Faroe Islands. But comments on the identification are most welcome as it is rather tricky when pictures and less than ideal. 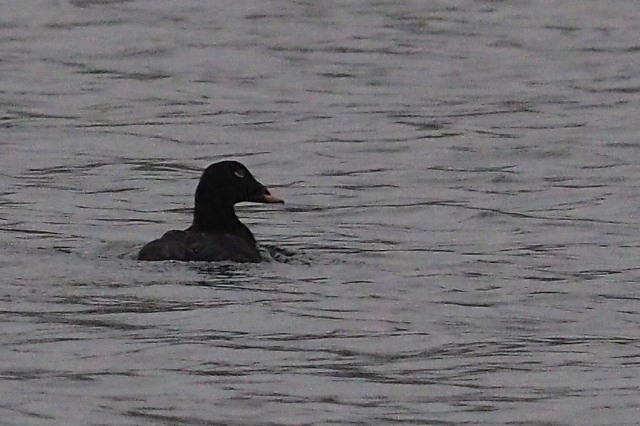 I sent the pics to some good friends, who all commented (albeit consciously) that the bird looked like an American White-winged Scoter. But surely the pictures leave much to be desired.

To default a species as being the most common of options has once again seemed to be a bad option when it comes to birding on the Faroes. And after all it’s been 7 years or so since I saw my last adult male Velvet Scoter. But lesson learned once again. Always scrutinize your scoters. Not that it would have made a huge difference after all. The ferry still needed to be caught.