One if not the most interesting ornithological feature in 2012 was the invasion of Iceland Gulls from january to april. Here follows an article on the matter.

As usual the first Iceland Gulls arrived in october, but numbers were generally very low until just after christmas were more birds arrived and the first Kumlien’s Gull was seen. On the 1st of january we got the first hint of the invasion to come as 10 Iceland Gulls were seen in Sørvágur, four in Runavík and Klaksvík 12 in Klaksvík including two Kumlien’s Gulls.

During the first weeks of the invasion about 30 Iceland Gulls of all age groups have been found dead. They were all very skinny and have most likely died from hunger. Food shortage in the arctic therefore could have triggered the invasion. But birds arriving later seemed fit.

After that numbers once again dropped but a new influx occurred 14th to 17th of february where up to 265 Iceland Gulls including 15 Kumlien’s Gulls were seen in Klaksvík alone.

When looking at these extreme numbers of Iceland Gulls on the Faroes one should remember, that 99% of the birds have been counted by two observers. In addition to that just about 50% of the harbours on the Faroes have not been checked even once during the period. This could mean that as many as 50% of all then birds have passed through unnoticed.

Furthermore it seems like there is a high turn over. Many obvious Kumlien’s Gulls for instance have only lingered for one day while others stayed for a few days. But in general for the first 6 weeks or so of the invasion there seemed to be a constant movement of birds coming and going. For the last two weeks more birds seemed to have settled a bit more – and there is for instance one particular bird that has been present in Klaksvík since december 2011.

It is impossible to sort out all possible double counts, but if we say that 20% of all the birds seen have been counted twice I think it is close to the reality.

The total number of Iceland Gulls counted during january and february is 5.347 birds. If we say the 20% have been counted twice that leaves us with 4.278 Iceland Gulls.

The birds we have labeled as Kumlien’s Gulls have been adults with dark markings on the primaries, first and second winter birds with a significant contrast between inner and outer primaries and a dark tail band, and third and fourth winter birds with solid contrast between inner and outer primaries and not just a brownish wash to them. All in all this can be called a rather conservative approach and it leaves us with a number of birds that do not look like either typical Iceland Gulls or Kumlien’s Gulls.

But the number of well-marked Kumlien’s Gulls was 310 – here double counting has been taken into consideration. 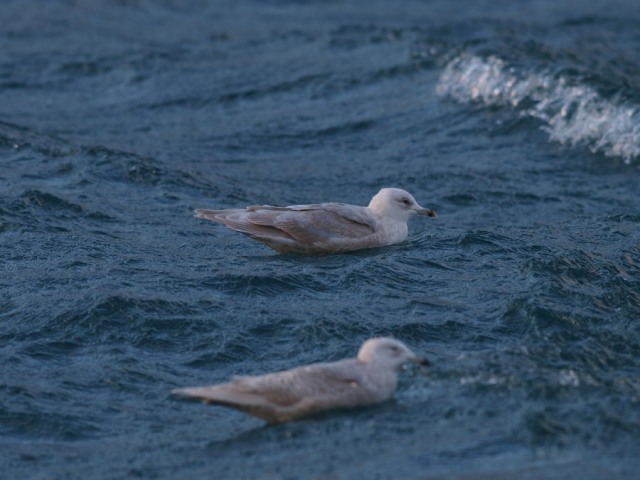 One of the many brown Iceland Gulls.

As many as 60% of the birds seen during this invasion do not fit with what is considered a typical Iceland Gull by many – neat rounded head, light iris in all plumages except first winter, rather fine bill and no markings on the primaries at all. Especially a lot of second winter birds were brownish with a dark iris and rather heavy structure – but most of them did not have any contrast between inner and outer primaries and had no real markings on them either. Included in the 60% are also adult birds that show a dark iris, rather dark mantle colour or a very heavy structure over all.

In april I was away from the Faroes, but Klaus Malling Olsen and Rodmund á Kelduni saw about 700 Iceland Gulls in a week.

2 comments on “Iceland Gull invasion on the Faroes”